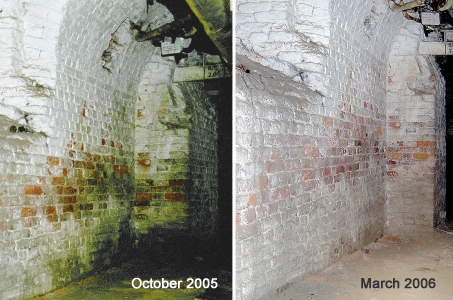 The picture shows the continuous drying process of the basement.

The first test installation was made in October 2005, the test run was finished in March 2006. The unit was installed at a very damp place in the cellar vault. Test records have shown that the degree of humidity of the walls has been reduced up to a third depending of the reading points.

10 units were installed in 2006 and another 181 units in 2008. With the Drymat Systems is a permanent drying up to the core of the masonry possible.

I have no objection mentioning my name on your website as a very satisfied user of your drymat system. Since the installation of the drymat unit there is a significant reduction in the dampness in the house. Usually at this time of the year the paintwork has started to bubble and show stains of rising damp , now there are no signs of damp anymore , it looks the process is really working , excellent.
I will recommend the drymat unit to all my friends and business relations.

The house I bought in the village of Almadena was old and showed severe rising damp problems , paint was falling of the walls on various places. After reading about the drymat system I applied for a free humidity survey . The measurements showed high levels of dampness in the walls , so I decided to have the system installed. It turned out to be an investment worth having . The walls are dry to the touch and the musty smell has gone.
I will be happy to recommend the system to anyone with rising damp problems.

We bought a house in Lagos 4 years ago which turned out to have great humidity problems. All the metal in the house turned out to be rusty, we could feel the smell of humidity from time to time and there were humid flies downstairs. A good architect then recommended that we contact Mr. Verloop that sells and installs Drymat system that can solve humidity problems. Mr. Verloop visited us and made measurements in the house that showed very high humidity values in our walls. We then decided to install a Drymat unit and have been able to follow how the moisture decreases year after year. Now the humidity problems are completely gone. We will therefore will be glad to recommend Mr Verloop and his Drymat solution for everyone that have the same problems as we had.

In the basement of my new villa appeared a serious rising damp problem after a couple of years, I had 2 drymat units installed and I am very happy with the drymat system, noticeable drop in humidity and professional after sales control.

In 2015 I bought an apartment on the groundfloor in Praia da Luz . Like in many houses in the algarve there was showing rising damp in all the walls , visible by paint and plaster coming of the lower part of the walls.The owner of the apartment confirmed that he had yearly repairs on the paint and plaster.After I visited holland for a month and returned to my apartment in Praia da Luz all bedlinnen was humid and in the cupboards was a very mouldy smell. At the Blip exhibition in Portimao I came in contact with Drymat Systems Portugal and asked Martin Verloop to do a free humidity survey in my apartment , the measurements showed very high humidity levels in the lower parts of the walls . So I decided to invest in the Drymat System and had it installed. Already in a couple of months it smelled and felt much less mouldy , no humid bedlinnen anymore and no smells on my clothes in the cupboards either. 12 months after installation a free controle measurement done by Martin Verloop showed already a decrease in humidity by over 50 % on 5 different locations in the apartment and the comfort of living did improve a lot. Now when I am heating my apartment in winter it needs much less time to heat up while the apartment is dry now , a side effect is the much dryer envirement , when I wake up my body feels much better without all that humidity , the Drymat Unit is realy doing what it promisses to do and is defenitly worth the investment , it did solve all the humidity issues in my apartment.

Our vila was only 12 years old and after 11 years it was completely renovated again .Still on several places we had problems with rising damp . 1,5 year after the Drymat Unit was installed the controle measurements ( free of charge ) showed that the average humidity we first had ( 175 liters of water in a m3 wall ) decreased to 37 liters of water in a m3 wall . Not necessary to say we are very happy with the Drymat System.

Despite the fact we had a new vila ,we had already rising damp in our bedroom . After the installation of the drymat unit we noticed that the humidity was decreasing rapidly. This was confirmed as well 1,5 year later when Martin Verloop came down to do a controle measurement . So we are very happy we had the system installed.

We own the camping Rodondo near Tomar . One of the old camping facility buildings had a huge humidity problem . Since I realised , 2 years after the installation of the drymat unit , what the unit was capable of ( the walls completely dried out ) , I straight away had another unit installed in my vila . I can recommend anybody with rising damp problems to have the drymat unit installed.

With our engineers team we had the task to completely renovate the Capela de Sao Goncalo , one of the main issues of the renovation was the lower part of the walls of the capela , from the floor till 2,5 meters high the walls were saturated with water , how could we repair that without doing any damage to the walls ? We start searching on the internet and learned about the renovation of the heremitage museum in St. Peterburg ( Russia ) , they had the same issues with many walls in the museum and obvious the drymat system had completely eliminated the water levels in the walls.

So we contacted drymat systems portugal and had the drymat unit installed , during the drying period we had our own computer to measure the humidity levels in the walls and we were very surprised that those saturated walls were drying so quickly , we solved the problem without doing any interference on the construction which seems to be a very sufficient and innovated solution.

We installed the DRYMAT SYSTEM in April 2018 having experienced serious damp issues in Master Bedroom. A de-humidifier was removing 1 Litre of water /hour from bedroom with all doors and windows closed. Since installing drymat system the de-humidifier has remained in its box in the garage unused.
The house now feels comfortable no more flaky paint with salt and mineral deposits on lower parts of wallS throughout the house. VERY SATISFIED

I just want to let you know how reassuring it is to have your Drymat system installed in our house. Our walls are dry this year, despite all the rain we have had.
Now I no longer have an excuse not to paint them!

The installation of our Drymat system was efficiently made by Martin Verloop in Spring 2011.

The wall feels and looks drier to touch and is showing continual improvement. It appears to be an effective solution to a very damp wall. To date we are extremely pleased with the overall performance of the Drymat system.

This is to confirm that the Drymat Unit you installed around 3 years ago realy has been drying our house.

We have an old house with 60 cm thick walls and year by year it was smelling moldy and we had to repaint and on some places replaster our house yearly because the paint and plaster kept on falling from the walls.

No need to say we are very satisfied with the system, it has solved our severe rising damp problem and we can recommend anybody to have a free humidity survey done by Drymat Systems.

Our house had a severe rising damp problem until we red about Drymat Systems, after a humidity survey done by Martin Verloop we decided to install the system to finally get rid of all the humidity in our house.

The system was installed just before the very rainy winter of 2010 / 2011 and despite all the rain the house was smelling less mouldy and it felt less humid. In may, 9 months after installation a control measurement was done and humidity levels in our walls were down already 32% on 3 different locations. The walls in our house continue to get dryer showed by the control measurements wich are done on a yearly base, so we are very happy we installed the system and can recommend it to anyone.

We will refer anybody with a rising damp problem to you, as showed on the first control measurement you did on 10.02.2012 (1 year after installation) the rising damp decreased between 57% and 62%, the control measurement you did this year on 30.01.2013 the total decrease compared with the levels before installation was between 74% and 81%, it is obvious we are very satisfied with the system and every winter before the installation of the Drymat Unit we have had some problems with our health (always having a kind of fever and strange ways of breathing), we think because the humidity levels went down dramaticly , we do not have those problems anymore for already 2 years. We will keep referring people to you with rising damp problems.

After finishing the construction of my house I noticed that during the winter the basement always showed signs of humidity like the painting close to the bottom was falling down.

During the following years I tried to resolve the problem. I applied various painting products, which where recommended for this problem, but without a satisfying solution. Finally I installed a dehumidifier, which resolved the problem but has had the disadvantage that the electricity costs increased and someone has to be there to clear the water tank when it is full. That means, you have to switch it off when you leave the house for a few days.

Fortunately the problem was resolved by installing a Drymat system at the end of the year 2009. It does not only removes the humidity permanently, keeping the basement dry and without smelling moldy, it decreases also the yearly electricity costs. Final result: complete satisfaction.